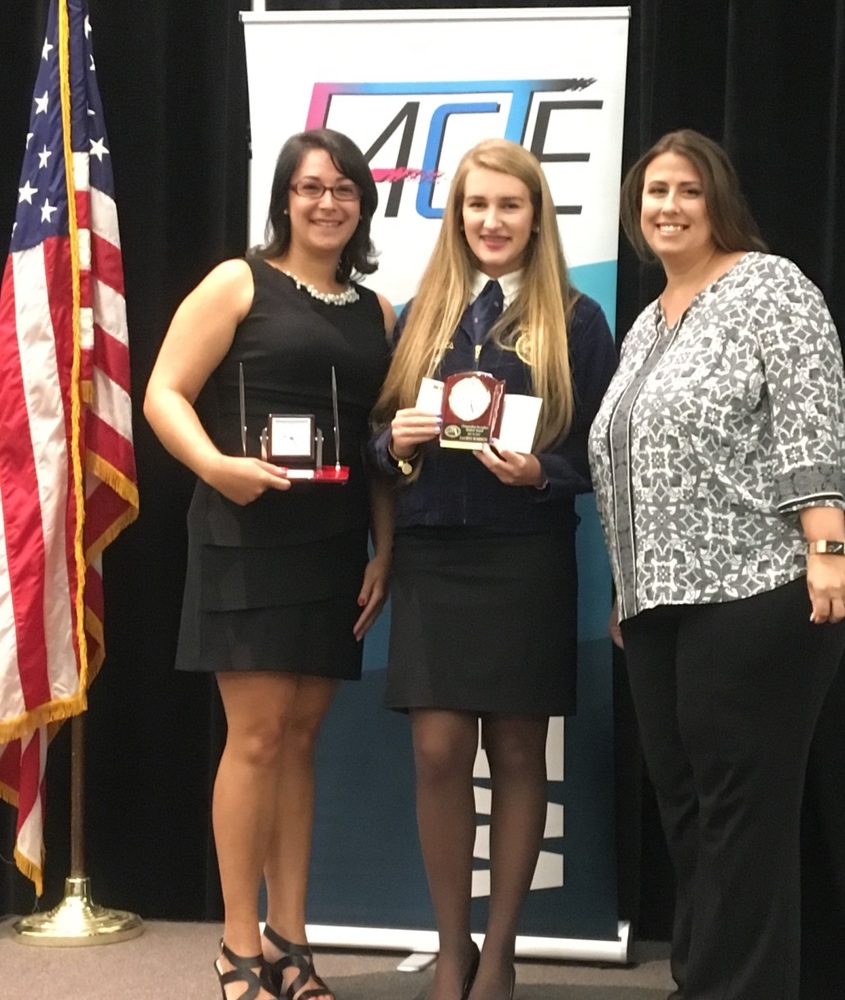 Career and Technical Education (CTE) in Gilchrist County really stood out at a recent statewide association meeting, with two of our very own being recognized with a state award.  At last week’s FACTE conference (Florida’s Association for Career and Technical Education), an awards ceremony was held to honor special persons within the career tech community.  Recipients received a plaque and a cash award.

Lauren Roberts, a CTE student in the biotechnology program at THS, was announced as the winner of the state’s Outstanding Student Award.  Lauren is very deserving of this honor.  She plans to graduate from THS with an Associate of Arts degree and become a State FFA officer.  Her educational goals include earning a degree in Agricultural Research from the University of Florida.  With her record of achievement, these goals are certainly attainable.  Lauren’s current resume includes dual enrollment participation, FFA leadership roles, supervised agricultural experiences, many extracurricular activities, community service, and a variety of other awards and honors.  Patricia Powers, the district’s CTE Director, stated regarding Lauren, “She is very deserving of this recognition, and we are proud of her continued work toward reaching her goals. What an amazing young woman.”

In addition, THS instructor Ashley Thoron was announced as the winner of the President’s Award for Outstanding CTE Educator.  Mrs. Thoron leads the Academy of Agriscience and Natural Resources at Trenton High School.  She has worked diligently since she took over this academy in the 2013-14 school year to cultivate and strengthen the academy’s agritechnology and biotechnology programs for the benefit of her students.  Mrs. Thoron prepares students not only for industry certification opportunities, but also for college and career success.  Her goal is to ensure that her students reach their maximum potential.  “I cannot say enough about how much we appreciate our teachers and what they do for students, and Mrs. Thoron is one that really has the drive to go above and beyond at every opportunity.  It is because of teachers like Mrs. Thoron that we have students like Lauren. They both have such a passion for what they do” explained Mrs. Powers.

Superintendent Rob Rankin was not surprised by the small school district receiving two state level awards honoring outstanding performance, explaining “We have a great group of teachers, staff, administrators, and students.  Hard work pays off, and there is a tremendous work ethic in this group. That’s one of the reasons that we are an A school district.”